This will cover how to set up permissions and group prefixes with PocketMine using the most popular plugin called PurePerms with their additional plugin called PureChat.Using this plugin is quite straight forward. To do this, you will need to know how to install plugins on the server.If you need help installing plugins, please refer to this article. How do I install plugins on my server?PurePerms: https://poggit.pmmp.io/p/PurePerms/1.4.2-c2aPureChat: https://poggit.pmmp.io/p/PureChat/1.4.10-6To get started with permissions, you will want to do this through commands, as this is much easier.You can either choose to set this up from in-game or via the console. If you choose to set this up via the console, remember that you cannot add a slash in the console commands.Creating A GroupThe command you will need for this is:To add a group. You would replace <groupname> with the group name you want.For example:This would create a group called Member.Which is pretty straight forward. You will want to follow this for all group creation.Adding Permissions To A GroupIt is quite simple to add permissions to your groups.The base command is as follows:Let's say I want to give the Member group permission to do /spawn. For example:Please note that these permission nodes are not realTo add more permissions, you would use the same command for each permission and group. Setting A Default GroupThe base command for setting a default group is the following:So, I want the Member group to be the default group everyone gets upon joining the server.To do that, this is simple. Just do the following:What if I want to change the default group later? Well, you can just use the same command with the group you would like to be the new default group. Setting Up InheritancesWhat is a group inheritance? Well, it will allow one group to use another group's permissions.This is quite simple to do.Base command:Say that you want the Mod group to get the Member groups permissions.You would do the following:The command above will allow the Mod group to use the Member groups permissions without the hassle of adding each and every permission to the Mod group.If you would like to later remove the groups' inheritance you can easily do this command:To remove Members permissions from the Mod group, you would do the following:Adding/Removing Users To A Specific GroupNow, what if I want someone or myself to be in a different group? Well, you can easily do this with the following command:For example:That would add that specific user to the Owner group. This process can be completed for other users and other groups. This is especially useful for staff. How do I remove people from a group?You would just need to set them to a different group.Adding Individual PermissionsYou can also easily add permissions to a specific user.This is done from the following command:Setting Group PrefixesYou would want to use the following command:If you were to want the owner group to have a green prefix, you would do as follows:Here is a color and format reference chart: 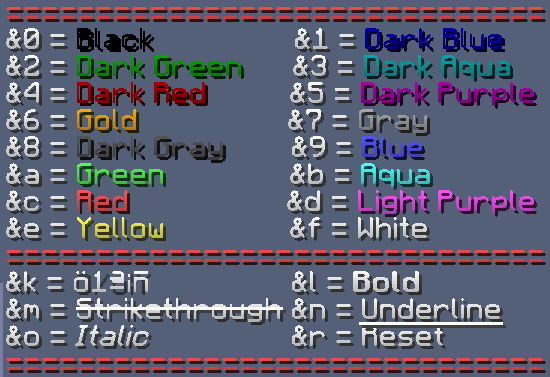 That is the basis of setting up permissions with PurePerms on PocketMine and using the addon PureChat to add a prefix.Please do let us know if you need any further help with this via our live chat feature!

Was this article helpful?